Its history begins with the events of 5 November 1605, when Guy Fawkes, a member of the Gunpowder Plot, was arrested while guarding explosives the plotters had placed beneath the House of Lords.

Celebrating the fact that King James I had survived the attempt on his life, people lit bonfires around London. 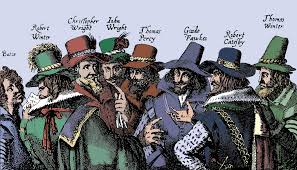 Months later, the introduction of the Observance of 5th November Act enforced an annual public day of thanksgiving for the plot's failure.

Within a few decades Gunpowder Treason Day, as it was known, became the predominant English state commemoration, as it carried strong Protestant religious overtones it also became a focus for anti-Catholic sentiment.

Puritans delivered sermons regarding the perceived dangers of popery, while during increasingly raucous celebrations common folk burnt effigies of popular hate-figures, such as the pope.

Towards the end of the 18th century reports appear of children begging for money with effigies of Guy Fawkes and 5 November gradually became known as Guy Fawkes Day. 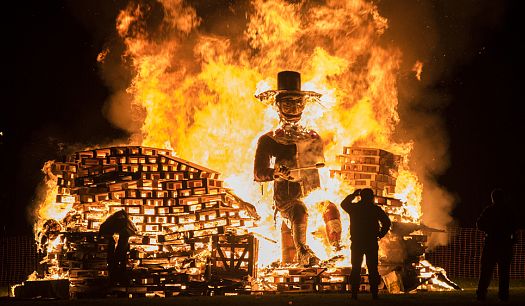 Towns such as Lewes and Guildford were in the 19th century scenes of increasingly violent class-based confrontations, fostering traditions those towns celebrate still, albeit peaceably.

In the 1850s changing attitudes resulted in the toning down of much of the day's anti-Catholic rhetoric, and the Observance of 5th November Act was repealed in 1859.

Eventually the violence was dealt with, and by the 20th century Guy Fawkes Day had become an enjoyable social commemoration, although lacking much of its original focus.

The present-day Guy Fawkes Night is usually celebrated at large organised events, centred on a bonfire and extravagant firework displays.