The bombers' journey began at 04:00 BST as three of the group - Mohammad Sidique Khan, 30, Shehzad Tanweer, 22, and 18-year-old Hasib Hussain - left Leeds, West Yorkshire, in a rented car bound for Luton, Bedfordshire. There they met their fourth accomplice, 19-year-old Germaine Lindsay, before heading to the capital by train.

They went on to detonate four devices - three on the Underground and one on a double-decker bus. 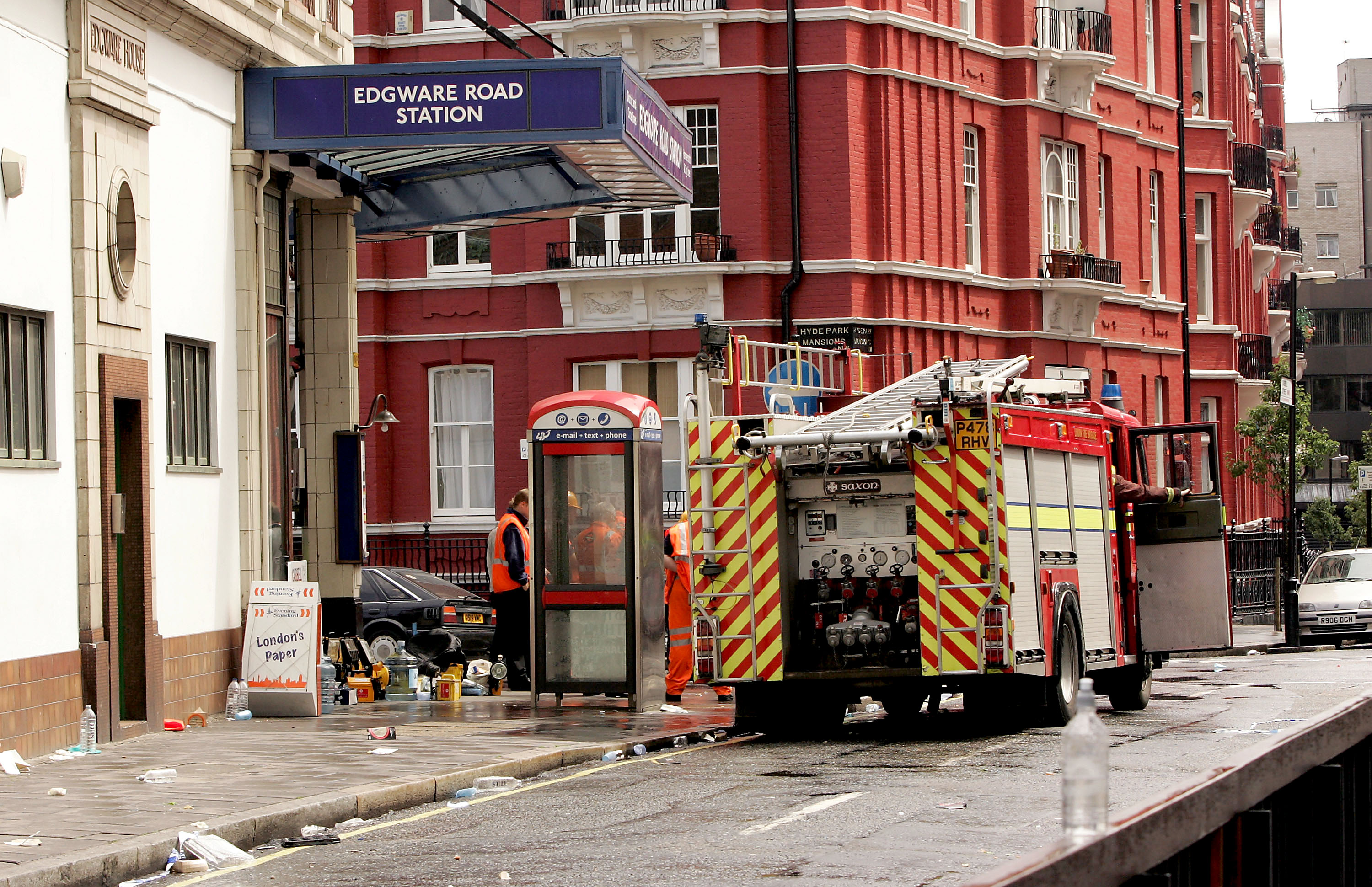 Three of the four bombs went off just before 08:50 BST on Tube trains that had departed King's Cross.

Ringleader Mohammad Sidique Khan detonated his device on a westbound Circle Line train heading towards Paddington. The bomb exploded at Edgware Road in the second carriage close to the second set of double doors. It killed six people. 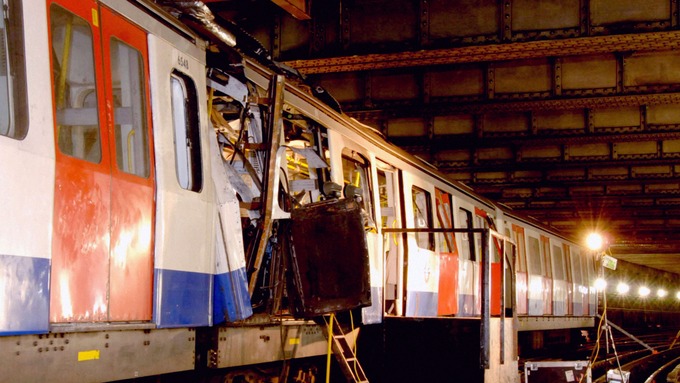 Shehzad Tanweer detonated his device on an eastbound Circle Line train between Liverpool Street and Aldgate. The explosion at the rear of the second carriage killed seven people. 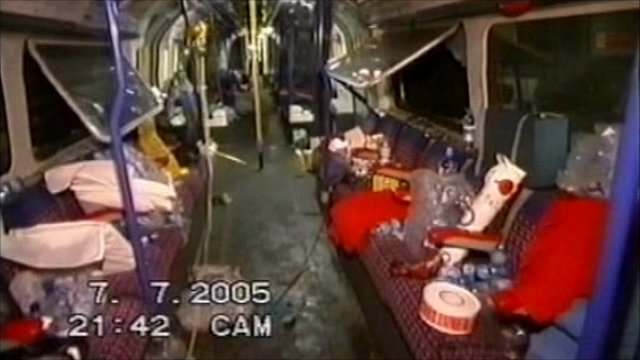 The most deadly attack occurred on the Piccadilly Line between King's Cross and Russell Square.

Germaine Lindsay detonated his bomb next to the rear set of double doors in the front carriage of the packed train, just after it pulled out of King's Cross station. Twenty-six people were killed. 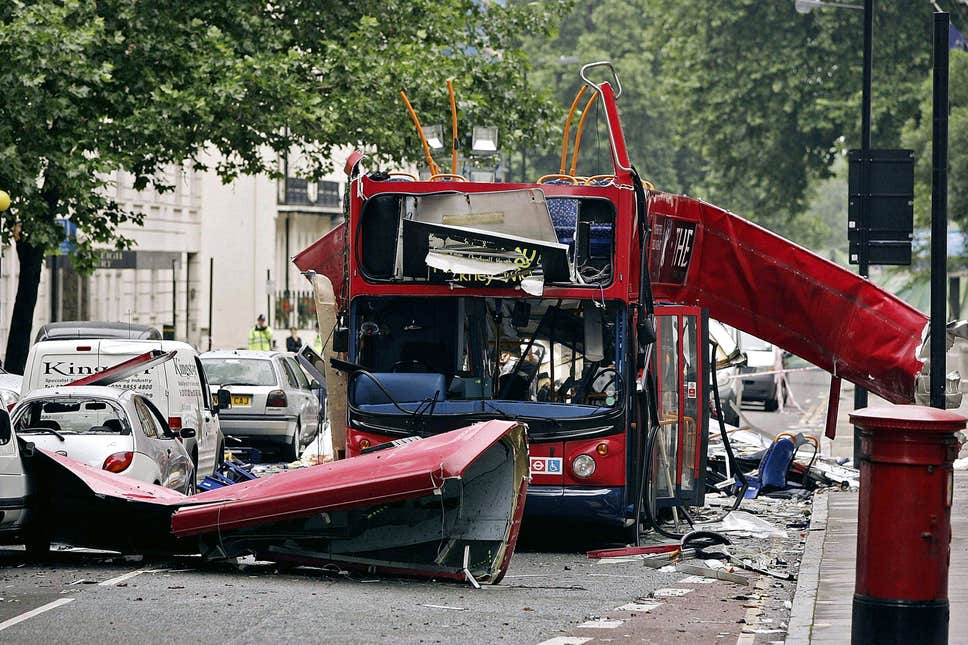 The youngest of the bombers, Hasib Hussain, detonated his device on a double-decker bus in Tavistock Square, not far from King's Cross. He killed 13 people.

The bombing, the fourth and final attack, took place at 09:47 BST - about an hour after the other explosions. Hussain was caught on CCTV moving in and around King's Cross station following the first three blasts. Mobile phone records showed he had tried in vain to contact his friends.

The number 30 bus was torn apart in front of the headquarters of the British Medical Association, where a conference was being held. While medical equipment was lacking, dozens of doctors offered lifesaving expertise. 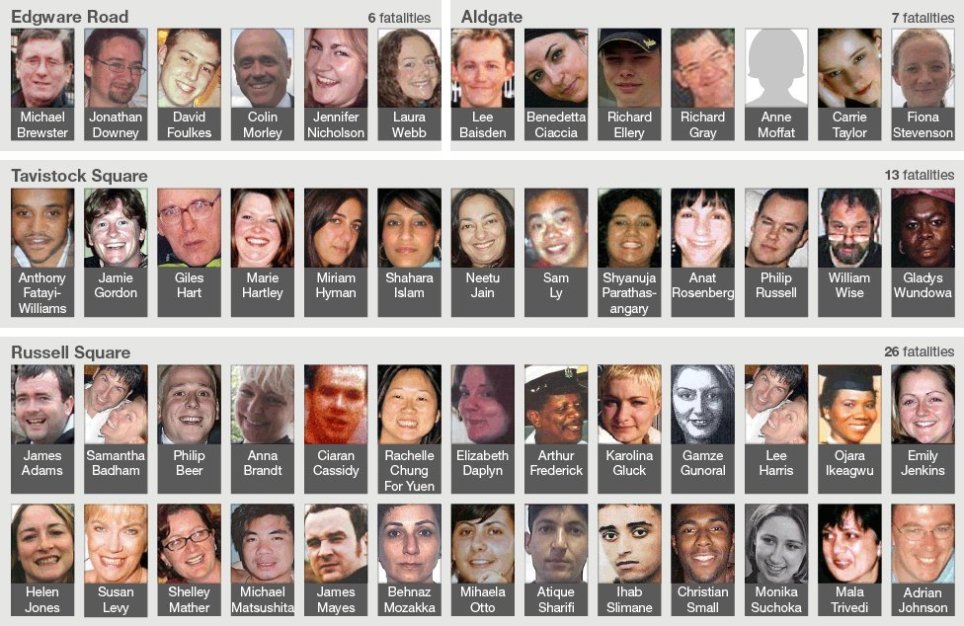 52 people of 18 different nationalities, all of whom were UK residents, were killed, and more than 700 were injured in the attacks, making it Britain's deadliest terrorist incident since the 1988 bombing of Pan Am Flight 103 near Lockerbie, Scotland, and England's deadliest since the 1974 Birmingham pub bombings.

The attack was the country's first Islamist suicide attack.

The explosions were caused by triacetone triperoxide IEDs packed into backpacks.

The 7 July attacks occurred the day after London had won its bid to host the 2012 Olympic Games.