ON THIS DAY, 15th September 2004, a British man was shot dead walking to his car in Riyadh, Saudi Arabia.

A British man was shot dead by two Islamic terrorists whilst sat in his car at the Max shopping centre in eastern Riyadh, Saudi Arabia.

Edward Stuart Muirhead-Smith, 55, was a married father of six children and a British national.

Muirhead-Smith worked for the British telecommunications corporation Marconi as a training manager. 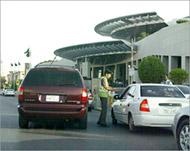 He had been hired in Saudi Arabia and had worked for the company for a year, said Marconi spokesman David Beck in Britain.

Marconi employed about 600 people in the Middle East providig telecommunications network services to the Saudi government, including the Defense Ministry.

WE REMEMBER THE VICTIM.