ON THIS DAY, 1st September 2004, a group of armed Islamic militants occupied a school taking over 1,100 people as hostages (including 777 children) in Beslan, North Ossetia-Alania, Russia. 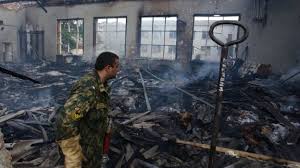 The crisis began when a group of armed Islamic militants, mostly Ingush and Chechen, occupied School Number One (SNO) in the town of Beslan, North Ossetia (an autonomous republic in the North Caucasus region of the Russian Federation) on 1 September 2004.

The hostage-takers were the Riyad-us Saliheen, sent by the Chechen warlord Shamil Basayev, who demanded recognition of the independence of Chechnya, and Russian withdrawal from Chechnya.

The attack on the school took place in 2004 on 1 September—the traditional start of the Russian school year, referred to as "First Bell" or Knowledge Day.

On this day, the children, accompanied by their parents and other relatives, attend ceremonies hosted by their school. 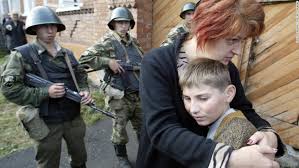 Because of the Knowledge Day festivities, the number of people in the schools was considerably higher than on a normal school day.

Early in the morning, a group of several dozen heavily armed Islamic-nationalist guerrillas left a forest encampment located in the vicinity of the village of Psedakh in the neighbouring republic of Ingushetia, east of North Ossetia and west of war-torn Chechnya.

The terrorists wore green military camouflage and black balaclava masks, and in some cases were also wearing explosive belts and explosive underwear.

On the way to Beslan, on a country road near the North Ossetian village of Khurikau, they captured an Ingush police officer, Major Sultan Gurazhev. 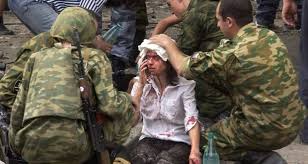 Gurazhev was left in the vehicle after the terrorists reached Beslan and ran towards the schoolyard; he went to the district police department to inform them of his ordeal and the actions of the militants, adding that that his duty handgun and badge had been taken.

At 09:11 local time, the terrorists arrived at Beslan in a GAZelle police van and a GAZ-66 military truck.

Many witnesses and independent experts claim that there were, in fact, two groups of attackers, and that the first group was already at the school when the second group arrived by truck.

At first, some at the school mistook the guerrillas for Russian special forces practicing a security drill. 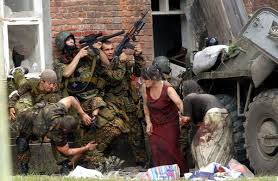 However, the attackers soon began shooting in the air and forcing everybody from the school grounds into the building.

During the initial chaos, up to 50 people managed to flee and alert authorities to the situation.

A number of people also managed to hide in the boiler room.

After an exchange of gunfire against the police and an armed local civilian, in which reportedly one attacker was killed and two were wounded, the militants seized the school building. 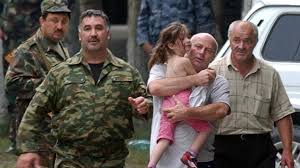 Reports of the death toll from this shoot-out ranged from two to eight people, while more than a dozen people were injured.

The militants herded their captives into the school's gym and confiscated all their mobile phones under threat of death, and ordered everyone to speak in Russian and only when spoken to.

When a father named Ruslan Betrozov stood to calm people and repeat the rules in the local language, Ossetic, a gunman approached him, asked Betrozov if he was done, and then shot him in the head. 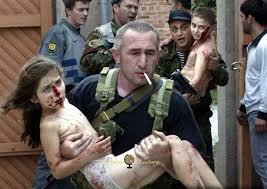 Another father named Vadim Bolloyev, who refused to kneel, was also shot by a captor and then bled to death.

Their bodies were dragged from the sports hall, leaving a trail of blood later visible in the video made by the hostage-takers.

After gathering the hostages in the gym, the attackers singled out 15–20 of whom they thought were the strongest adults among the male teachers, school employees, and fathers, and took them into a corridor next to the cafeteria on the second floor, where a deadly blast soon took place.

An explosive belt on one of the female bombers detonated, killing another female bomber (it was also claimed the second woman died from a bullet wound) and several of the selected hostages, as well as mortally injuring one male hostage-taker. 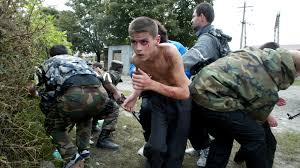 The hostages from this group who were still alive were then ordered to lie down and shot with an automatic rifle by another gunman; all but one of them were killed.

Karen Mdinaradze, the Alania football team's cameraman, survived the explosion as well as the shooting; when discovered to be still alive, he was allowed to return to the sports hall, where he lost consciousness.

The militants then forced other hostages to throw the bodies out of the building and to wash the blood off the floor.

One of these hostages, Aslan Kudzayev, escaped by jumping out the window; the authorities briefly detained him as a suspected hostage-taker. 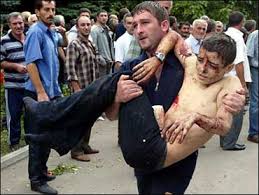 A line of three apartment buildings facing the school gym was evacuated and taken over by the special forces. The perimeter they made was within 225 metres (738 ft) of the school, inside the range of the militants' grenade launchers.

No fire-fighting equipment was in position and, despite the previous experiences of the 2002 Moscow theater hostage crisis, there were few ambulances ready.

The chaos was worsened by the presence of Ossetian volunteer militiamen (opolchentsy) and armed civilians among the crowds of relatives who had gathered at the scene; there were perhaps as many as 5,000 of them. 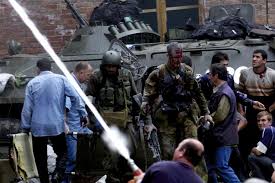 The attackers mined the gym and the rest of the building with improvised explosive devices (IEDs), and surrounded it with tripwires.

They also threatened to blow up the school if government forces attacked.

To avoid being overwhelmed by gas attack like their comrades in the 2002 Moscow hostage crisis, insurgents quickly smashed the school's windows. 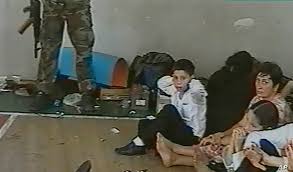 The captors prevented hostages from eating and drinking (calling this a "hunger strike", which they said they joined too) until North Ossetia's President Alexander Dzasokhov would arrive to negotiate with them.

However, the FSB set up their own crisis headquarters from which Dzasokhov was excluded, and threatened to arrest him if he tried to go to the school.

The Russian government announced that it would not use force to rescue the hostages, and negotiations towards a peaceful resolution took place on the first day...