On the morning of September 17th, a pipe bomb exploded in Seaside Park, New Jersey.

Later that day, a homemade pressure cooker bomb went off in the Chelsea neighborhood of Manhattan, New York City.

A second pressure cooker bomb was discovered four blocks away.

In the morning of September 17, 2016, in Ocean County, New Jersey, the Seaside Semper Five, a 5k run event, was expected to draw as many as 3,000 people, with many of them being veterans of the United States Armed Forces.

The race was delayed after a suspicious backpack was noticed in the vicinity of the starting point.

At about 9:30 a.m., shortly before the race was supposed to start, a pipe bomb exploded in a trash can on Ocean Avenue in Seaside Park. 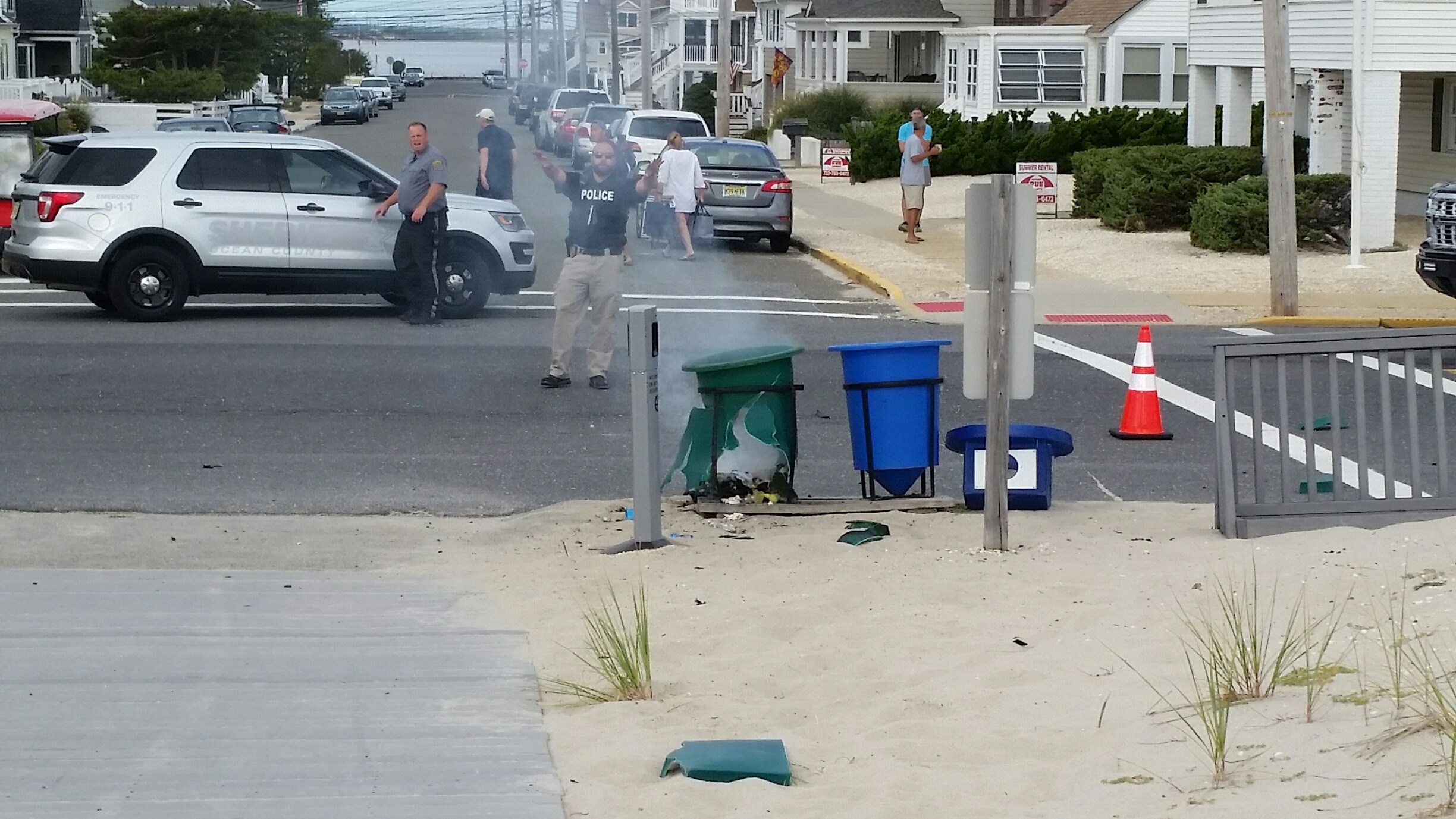 Three "rudimentary" pipe bombs, all reportedly timed to go off during the race, were later found, with only one of the three having exploded.

No one was hurt by this bombing.

The race was canceled after the explosion, and the beach and boardwalk in Seaside Park were evacuated. 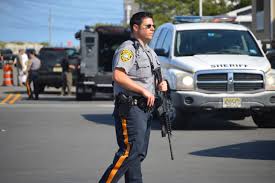 Police officials and federal agents soon went door-to-door, asking residents about information regarding the bombs or any suspicious activity they may have seen, heard, or witnessed.

In the Chelsea neighborhood of Manhattan in New York City, on the same day as the Seaside Park bombing, a pressure cooker bomb filled with shrapnel, in the form of small bearings or metal BBs, exploded in a crowded area on West 23rd Street, between Avenue of the Americas and Seventh Avenue at 8:31 p.m.

The explosion occurred in front of 133 West 23rd Street in the vicinity of a construction site, at which materials were in place for exterior renovations of the Visions at Selis Manor facility, an apartment building for the blind, at 135 West 23rd Street.

Other nearby buildings included the Townhouse Inn of Chelsea, many restaurants, and a Trader Joe's at 21st Street and 6th Avenue. 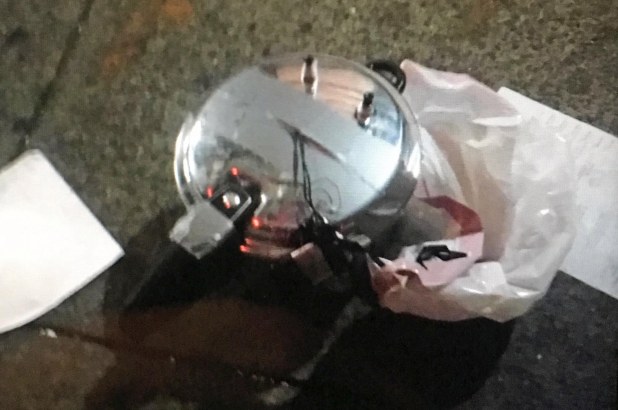 The Chelsea neighborhood is residential, known for its nightlife, and is not close to any significant tourist sites or government buildings.

Witnesses said that the explosion "seemed to have started inside a sidewalk dumpster" in the vicinity of Sixth Avenue, and photographs of a "twisted dumpster" in the middle of West 23rd Street went viral on Twitter.

A law enforcement official speaking on condition of anonymity stated that the explosion "appeared to have come from a construction toolbox" in front of a building, and photographs of the area reportedly showed a twisted, crumpled black metal box. 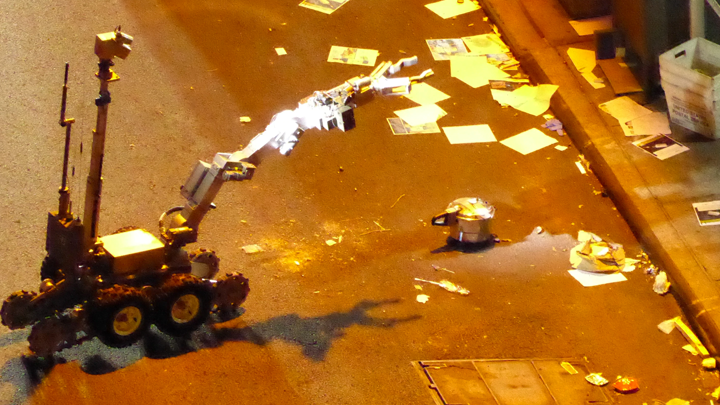 The explosion "was powerful enough to vault a heavy steel dumpster more than 120 feet through the air ... Windows shattered 400 feet from where the explosion went off, and pieces of the bomb were recovered 650 feet away."

The explosion caused damage to a nearby five-story brownstone, and debris was strewn in front of the St. Vincent de Paul Church.

The moment of the blast was captured on closed-circuit television footage from three cameras. 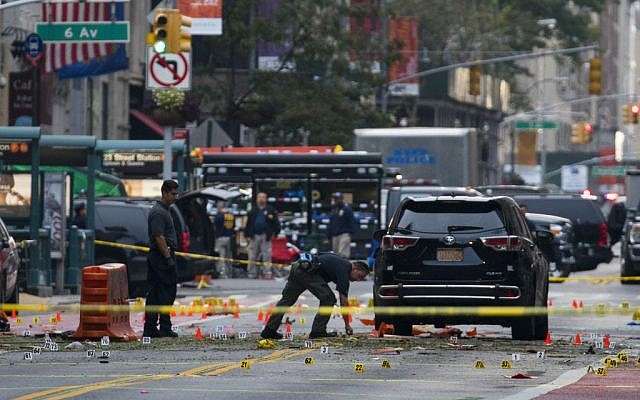 Thirty-one civilians were injured, 24 of whom were taken to four hospitals.

Most injuries were scrapes and bruises caused by flying debris and glass.

None of the injuries were ultimately life-threatening, but one victim sustained penetrating trauma to the abdomen and was rushed from the scene in serious condition. 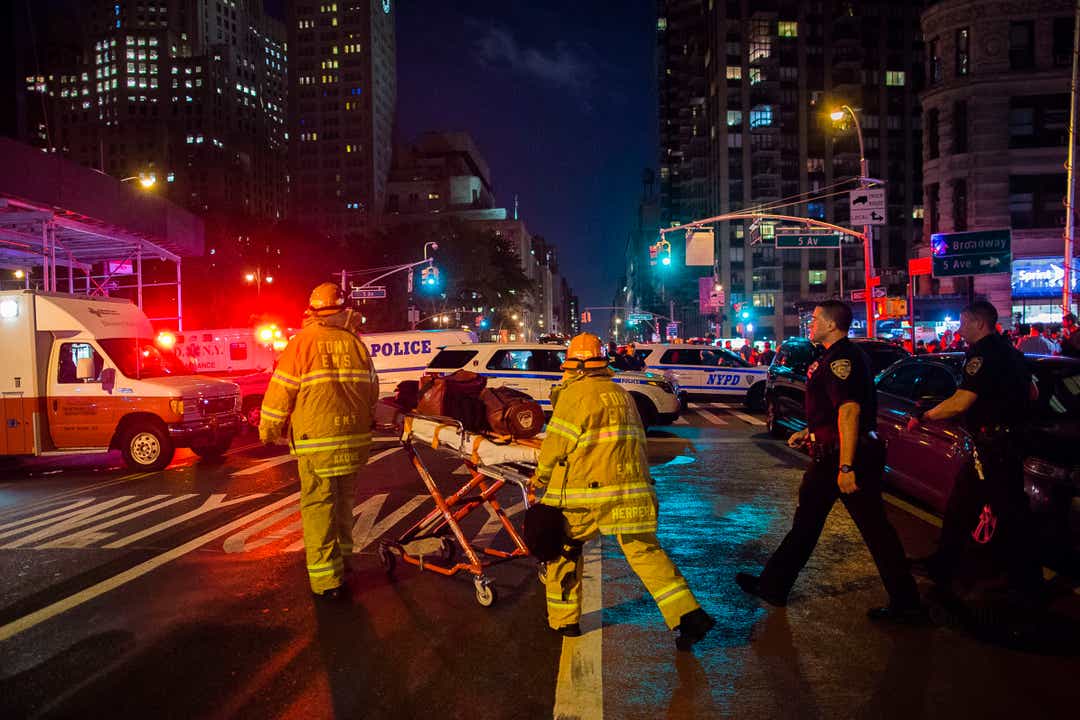 Several hours later, police received a 9-1-1 call from a resident of West 27th Street who had seen a suspicious-looking package near her home.

The device was under a mailbox at West 27th Street between Sixth and Seventh Avenues, four blocks away from the site of the original blast. 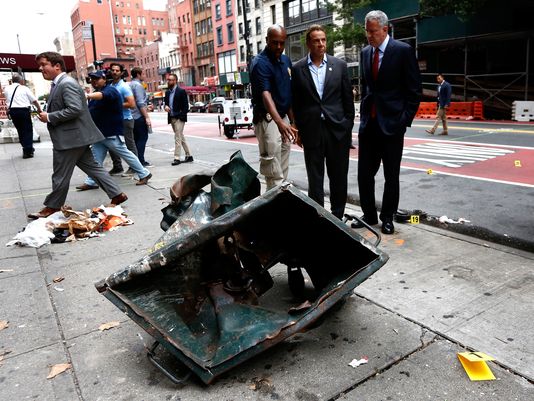 When authorities came to look, two state troopers discovered the pressure cooker bomb concealed in a plastic bag and connected with dark wiring to a mobile phone.

The bomb was filled with small bearings or metal BBs.

The pressure cooker bomb was described as similar to those used in the Boston Marathon bombing. 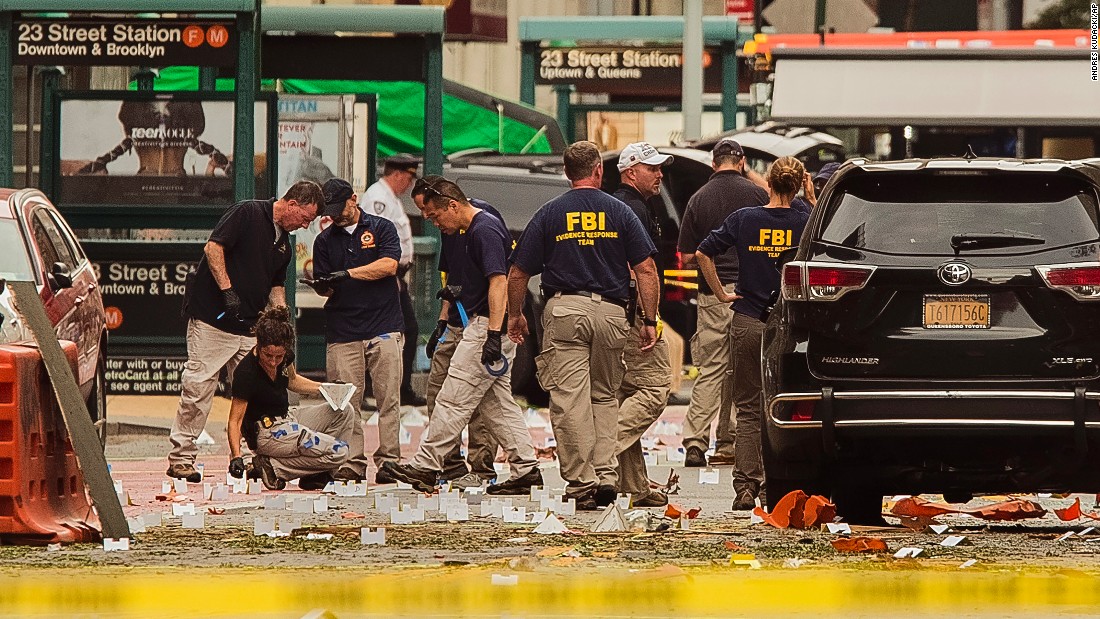 The bomb was removed by an NYPD bomb squad robot.

The robot placed the bomb in a containment chamber, and the device was driven away. 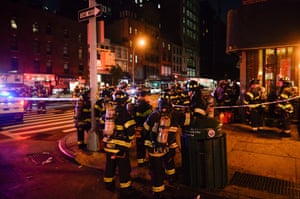 Investigators obtained fingerprints and the mobile phone from the device.

The bomb was driven to the NYPD's Rodman's Neckfiring range in the Bronx, where it was rendered safe via a controlled explosion.

The devices were to be sent to the FBI Laboratory in Quantico, Virginia, for further inspection.