ON THIS DAY, 2nd September 2004, a group of armed Islamic militants occupied a school for the second day taking over 1,100 people as hostages (including 777 children) in Beslan, North Ossetia-Alania, Russia. 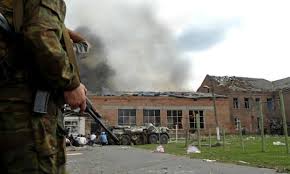 Negotiations with the hostage-takers proved unsuccessful, and they refused to allow food, water, or medicine to be taken in for the hostages, or for the dead bodies to be removed from the front of the school.

The Russian government downplayed the numbers, repeatedly stating there were only 354 hostages; this reportedly angered the hostage-takers who further mistreated their captives.

Several officials also said there appeared to be only 15 to 20 militants in the school. 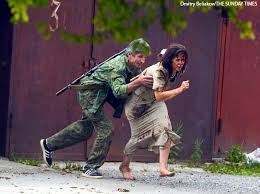 The crisis was met with a near-total silence from then-President of Russia Vladimir Putin and the rest of Russia's political leaders.

Only on the second day did Putin make his first public comment on the siege during a meeting in Moscow with King Abdullah II of Jordan: "Our main task, of course, is to save the lives and health of those who became hostages. All actions by our forces involved in rescuing the hostages will be dedicated exclusively to this task."

It was the only public statement by Putin about the crisis until one day after its bloody end.

In protest, several people at the scene raised signs reading: "Putin! Release our children! Meet their demands!" and "Putin! There are at least 800 hostages!" The locals also said they would not allow any storming or "poisoning of their children" (an allusion to the Moscow hostage crisis chemical agent). 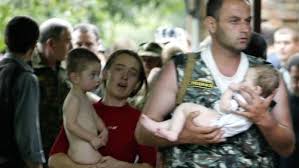 In the afternoon, the gunmen allowed Ruslan Aushev, respected ex-President of Ingushetia and retired Soviet Army general, to enter the school building and agreed to release 11 nursing women and all 15 babies personally to him.

The women's older children were left behind and one mother refused to leave, so Aushev carried out her child instead.

The rebels gave Aushev a video tape made in the school and a note with demands from their purported leader, Shamil Basayev, who was not himself present in Beslan. 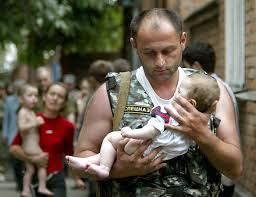 The existence of the note was kept secret by the Russian authorities, while the tape was declared as being empty (which was later proved incorrect).

It was falsely announced that the hostage-takers made no demands.

In the note, Basayev demanded recognition of a "formal independence for Chechnya" in the frame of the Commonwealth of Independent States. He also said that although the Chechen separatists "had played no part" in the Russian apartment bombings of 1999, they would now publicly take responsibility for them if needed.

The lack of food and water took its toll on the young children, many of whom were forced to stand for long periods in the hot, tightly packed gym. 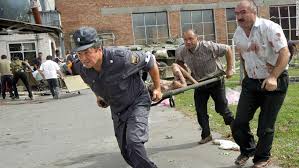 Many children took off their clothing because of the sweltering heat within the gymnasium, which led to rumours of sexual impropriety, though the hostages later explained it was merely due to the stifling heat and being denied any water.

Many children fainted, and parents feared they would die.

Some hostages drank their own urine.

Occasionally, the militants (many of whom took off their masks) took out some of the unconscious children and poured water on their heads before returning them to the sports hall. 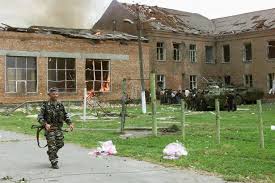 Later in the day, some adults also started to faint from fatigue and thirst.

Because of the conditions in the gym, when the explosion and gun battle began on the third day, many of the surviving children were so fatigued that they were barely able to flee from the carnage.

At around 15:30, two grenades were detonated approximately ten minutes apart by the militants at security forces outside the school, setting a police car on fire and injuring one officer, but Russian forces did not return fire.

As the day and night wore on, the combination of stress and sleep deprivation—and possibly drug withdrawal—made the hostage-takers increasingly hysterical and unpredictable. 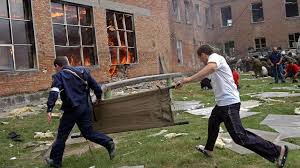 The crying of the children irritated them, and on several occasions crying children and their mothers were threatened with being shot if they would not stop crying.

Russian authorities claimed that the hostage-takers had "listened to German heavy metal group Rammstein on personal stereos during the siege to keep themselves edgy and fired up".

Overnight, a police officer was injured by shots fired from the school. Talks were broken off, resuming the next day.