ON THIS DAY, 3rd September 2004, a group of armed Islamic militants occupied a school for the third and final day taking over 1,100 people as hostages (including 777 children) in Beslan, North Ossetia-Alania, Russia. 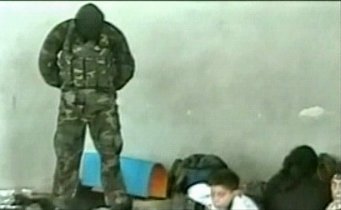 Totoonti said that both Maskhadov and his Western-based emissary Akhmed Zakayev declared they were ready to fly to Beslan to negotiate with the militants, which was later confirmed by Zakayev.

Totoonti said that Maskhadov's sole demand was his unhindered passage to the school; however, the assault began one hour after the agreement on his arrival was made.

He also mentioned that journalists from Al Jazeera television offered for three days to participate in the negotiations and enter the school even as hostages, "but their services were not needed by anyone." 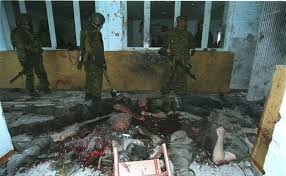 Russian presidential advisor and former police general, an ethnic Chechen Aslambek Aslakhanov, was also said to be close to breakthrough in the secret negotiations.

By the time he left Moscow on the second day, Aslakhanov had accumulated the names of more than 700 well-known Russian figures who were volunteering to enter the school as hostages in exchange for the release of children.

Aslakhanov said the hostage-takers agreed to allow him to enter the school the next day at 15:00. However, the storming had begun two hours before.

Around 13:00 on 3 September 2004, it was agreed to allow four Ministry of Emergency Situations medical workers in two ambulances to remove 20 bodies from the school grounds, as well as to bring the corpse of the killed terrorist to the school. 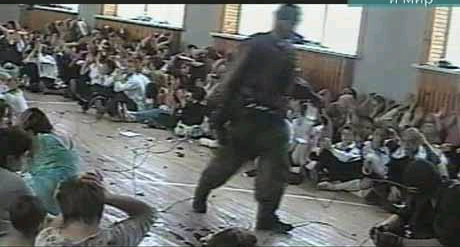 However, at 13:03, when the paramedics approached the school, an explosion was heard from the gymnasium. The hostage-takers then opened fire on them, killing two.

The other two took cover behind their vehicle.

At 13:05 the fire on the roof of the sports hall started and soon the burning rafters and roofing fell onto the hostages below, many of them injured but still living. 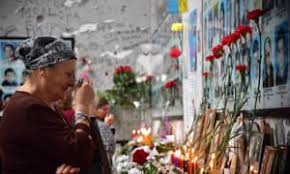 Eventually, the entire roof collapsed, turning the room into an inferno. The flames reportedly killed some 160 people (more than half of all hostage fatalities).

Part of the sports hall wall was demolished by the explosions, allowing some hostages to escape.

Local militia opened fire, and the militants returned fire. A number of people were killed in the crossfire.

Russian officials say militants shot hostages as they ran, and the military fired back. 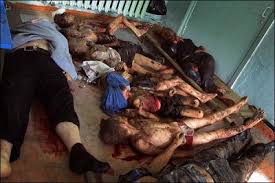 The government asserts that once the shooting started, troops had no choice but to storm the building. However, some accounts from the town's residents have contradicted that official version of events.

As the fighting began, an oil company president and negotiator Mikhail Gutseriyev (an ethnic Ingush) phoned the hostage-takers; he heard "You tricked us!" in answer. Five hours later, Gutseriyev and his interlocutor reportedly had their last conversation, during which the man said, "The blame is yours and the Kremlin's."

A chaotic battle broke out as the special forces fought to enter the school. 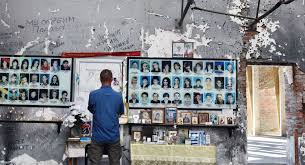 The forces included the assault groups of the FSB and the associated troops of the Russian Army and the Russian Interior Ministry, supported by a number of T-72 tanks from Russia's 58th Army (commandeered by Tikhonov from the military on 2 September), BTR-80 wheeled armoured personnel carriers and armed helicopters, including at least one Mi-24 attack helicopter.

Many local civilians also joined in the chaotic battle, having brought along their own weapons – at least one of the armed volunteers is known to have been killed. Alleged crime figure Aslan Gagiyev claimed to be among them. At the same time, regular conscripted soldiers reportedly fled the scene as the fighting began. Civilian witnesses claimed that the local police also had panicked, even firing in the wrong direction.

At least three but as many as nine powerful Shmel rockets were fired at the school from the positions of the special forces (nine empty disposable tubes were later found on the rooftops of nearby apartment blocks). The use of the Shmel rockets, classified in Russia as flamethrowers and in the West as thermobaric weapons, was initially denied, but later admitted by the government.

A report by an aide to the military prosecutor of the North Ossetian garrison stated that RPG-26 rocket-propelled grenades were used as well. 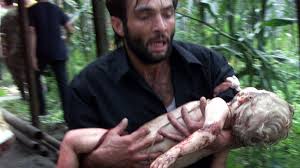 The rebels also used grenade launchers, firing at the Russian positions in the apartment buildings.

According to military prosecutor, a BTR armoured vehicle drove close to the school and opened fire from its 14.5×114mm KPV heavy machine gun at the windows on the second floor.

Eyewitnesses (among them Totoonti and Kesayev) and journalists saw two T-72 tanks advance on the school that afternoon, at least one of which fired its 125 mm main gun several times.

During the later trial, tank commander Viktor Kindeyev testified to having fired "one blank shot and six antipersonnel-high explosive shells" on orders from the FSB. 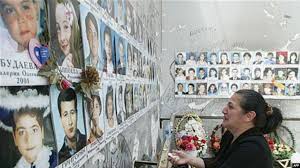 The use of tanks and armoured personnel carriers was eventually admitted to by Lieutenant General Viktor Sobolev, commander of the 58th Army.

Another witness cited in the Kesayev report claims that he had jumped onto the turret of a tank in an attempt to prevent it from firing on the school.

Scores of hostages were moved by the militants from the burning sports hall into the other parts of the school, in particular the cafeteria, where they were forced to stand at windows.

Many of them were shot by troops outside as they were used as human shields, according to the survivors (such as Kudzeyeva, Kusrayeva and Naldikoyeva). Savelyev estimated that 106 to 110 hostages died after being moved to the cafeteria. 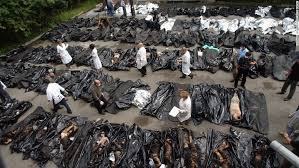 By 15:00, two hours after the assault began, Russian troops claimed control of most of the school. However, fighting was still continuing on the grounds as evening fell, including resistance from a group of militants holding out in the school's basement.

During the battle, a group of some 13 militants broke through the military cordon and took refuge nearby. Several of them were believed to have entered a nearby two-story building, which was destroyed by tanks and flamethrowers around 21:00, according to the Ossetian committee's findings (Kesayev Report).

Another group of militants appeared to head back over the railway, chased by helicopters into the town.

Firefighters, who were called by Andreyev two hours after the fire started, were not prepared to battle the blaze that raged in the gymnasium. 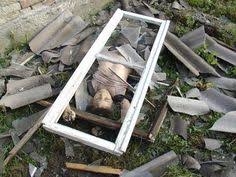 One fire truck crew arrived after two hours at their own initiative but with only 200 litres of water and unable to connect to the nearby hydrants.

The first water came at 15:28, nearly two and a half hours after the start of the fire; the second fire engine arrived at 15:43.

Few ambulances were available to transport the hundreds of injured victims, who were mostly driven to hospital in private cars.

One suspected militant was lynched on the scene by a mob of civilians, an event filmed by the Sky News crew, while an unarmed militant was captured alive by the OMON troops while trying to hide under their truck (he was later identified as Nur-Pashi Kulayev). Some of the dead insurgents appeared to be mutilated by the commandos. 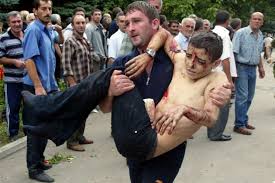 Sporadic explosions and gunfire continued at night despite reports that all resistance by militants had been suppressed, until some 12 hours after the first explosions.

Early the next day Putin ordered the borders of North Ossetia closed while some hostage-takers were apparently still pursued.

It was stated by the locals that over 200 of those killed were found with burns, and 100 or more of them were burned alive. 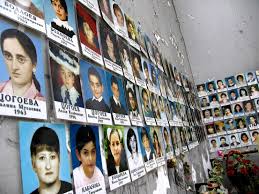